Today, Toyal Europe is 115 people who are strongly involved and attached to the company. Its current annual production amounts to more than 2,000 tons of aluminum pigments

As the company’s DNA has always been internationally oriented, 90% of turnover is achieved through export, with Toyal Europe working with some 60 different countries.

Three sites (Accous (64), Mourenx (64), Guyancourt (78) work daily and in close collaboration so that the company meets its new challenges and continues to be a source of excellence and innovation.

The company is also active in other markets:

When teams and companies are passionate, their work speaks for itself.

Encouraging and investing in the professional development of our employees remains a priority. Each year, the company devotes nearly 2,000 hours of formation to its employees (17 hours per employee on average).

For over 80 years now, and for more than 40 years within the TOYO Group, the company has been dedicated to the development of products and markets that make the most of the properties of aluminum in a way that is balanced with the development of societies and the protection of the global environment.

Because we believe above all that everything begins and ends with customer relationship (together with the customers), each woman and man in the company is driven by the same convictions and the same values, these values ​​guide our actions daily.

Supported by a Group that was the first more than 50 years ago to create the first research center on aluminum foil (1964) and then on pigments in 1967, Toyal Europe innovates in collaboration with Japanese teams and places research and development at the heart of its strategy.

Create the future, we will create it”…

We do everything possible to keep our promises, assume our responsibilities and manage our missions and projects with pragmatism, honesty and integrity.

Responding to differences of opinion with honest and courteous discussion encourages and promotes a positive work environment. "Passion makes the environment fascinating, respect makes it safe!"

Each employee has the space and freedom to work in close collaboration with each internal and/or external actor in order to serve the customer in the best possible way and with excellence.

We evolve in a changing and complex environment, each employee is invited to ask the right questions and seek the answers, to ask for advice, to learn and assimilate new skills even if they are not related to his or her own work universe.

Start a project or a new collaboration with us, Let's talk!

The company is also present in other markets with functional products, particularly for aerospace and defence sectors.

Toyal develops and produces technical powders for high-tech sectors (additive manufacturing) where the company is positioned as one of the most innovative players. Our customers and partners in the industry make Toyal a major and essential player in the market.

Finally, the company is positioning itself on other highly technical markets such as cold spray coating of parts and thermal interface materials to dissipate heat (batteries, technical glue, nano-thermal materials, etc.).

The history of the company and the valley began in 1938.

Aluminium Alcan de France, a subsidiary of the Canadian group Alcan, decides to set up an alumina-to-aluminium site near a hydroelectric source,

As a recognised player on the world stage, Alcan is planning to promote the production of aluminium powders and pastes (Alpâte®) at the Accous site in addition to aluminium production.

A joint venture with Japan

ALCAN joined forces with Toyo Aluminium K.K (Japan) and the company became "Alcan Toyo Europe". The company then benefits from a transfer of Japanese technologies.

1986
Transformation Plan
the company embarked on a profound transformation plan. There were many changes within the site and production increased rapidly.
1988
Implementation of new buildings
Alcan-Toyo crosses the river “Gave" to set up new buildings, in particular its aluminium atomisation unit.
1990
Increased production
the company invested in order to increase its production capacity, and a new building named "Soleil" was built in close collaboration with the local authorities, who were anxious to maintain an industrial activity in the Aspe Valley.
1995
ISO 9002 Certification
En 1995, l’entreprise obtient la certification ISO 9002.
1997
A 100% Japanese capital
Alcan sold its shareholding to Toyo Aluminium KK and the company's capital became 100% Japanese.
2014
Environmental issues
With the aim of professionalisation and continuous improvement, the company obtains ISO 9001 version 2000 certification in 2001. The ISO 14001 environmental programme is introduced at the site. Concerned about environmental issues and in close collaboration with TOYO, the company invested again in Bearn and inaugurated a new production unit in 2014, located in the heart of the Lacq basin (Coeur de Bearn). This new unit, dedicated to the production of passivated aluminium pigments that can be used, for example, in aqueous (water-based) solutions, enables the company to keep up with the technological advances imposed by its history and to meet the challenges of the environment. This process, called EMERAL©, is the result of several years of research within the Japanese Group.

The group in the world 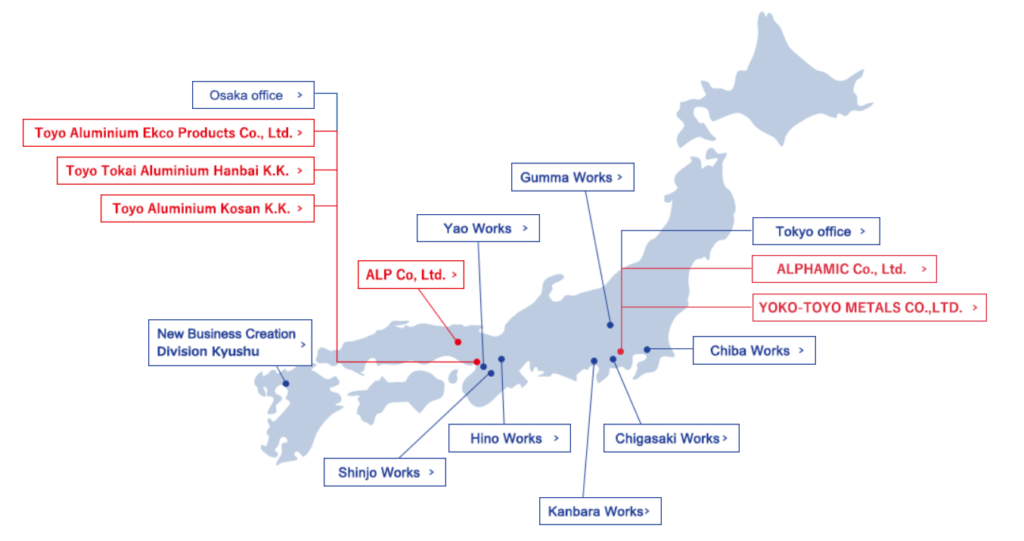 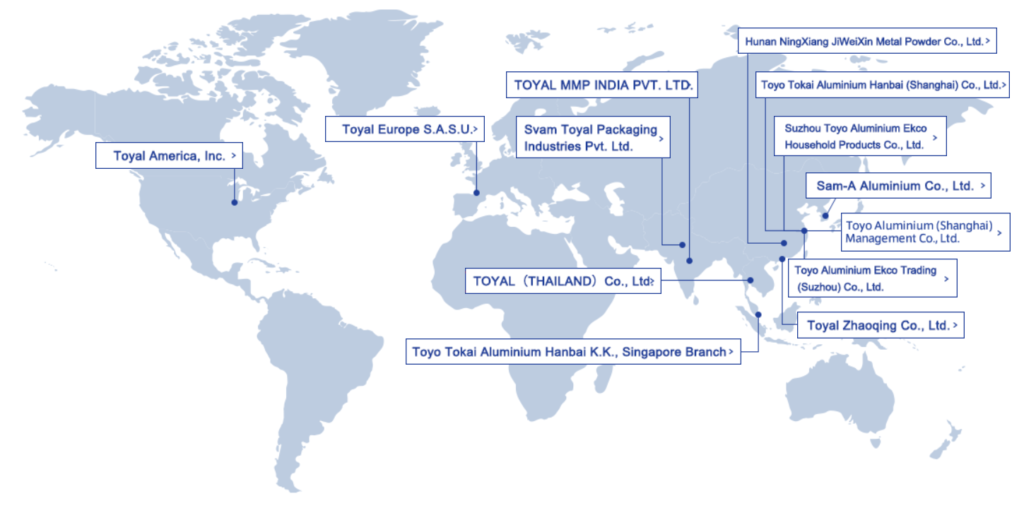